My partner John and I have just opened our second box of Pre-Conceive, so we have two weeks under our belt taking the drink and Omega 3 oils. We are really rocking and rolling with it now.

Interestingly, John took to the drink like a duck to water, right from the first glass. He even took charge and made sure it was stored properly. I wonder if it’s because it’s something practical that he can do towards starting a family. 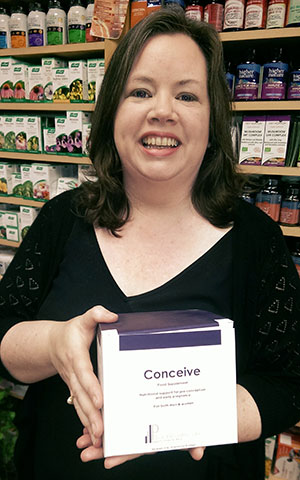 I am usually the one that’s been given all the advice and direction and I then relay it to him. I suspect it’s that the drink makes sense to him; he was very interested in the research and science behind it. I asked him what his advice would be for someone taking the drink in particular. and his response was: “Into the glass, give it a good stir and knock it back, job done”.

He hasn’t minded the taste at all, right from the beginning. So far he hasn’t noticed any major difference, but it is only two weeks in. He did mention he thought it might be having a mild effect on his stomach for a few days, and as a Naturopath, my thinking is that the extra nutrition is allowing his body to clear and clean itself.

As for myself, I did find the drink difficult to take in the beginning and I did not look forward to taking it. To start with, I decided to take the pre-Conceive drink just before breakfast, and unlike John, I let it settle for a few minutes to make sure it’s dissolved. I find it difficult to drink in one go and I admit I did have to hold my nose now and again as I found the taste quite odd (not unpleasant – just odd!). For the second week, I started taking it just before my lunch and that is working very well for me. It doesn’t bother me to take it now at all.

We both take it in water as we do not drink juices, and again, that’s been grand. What has really surprised me is a few days ago I stopped noticing the taste. I no longer need to down it in one or hold my nose and it’s not having any kind of effect on my stomach, even though I do have a sensitive tummy. I’m really glad I persevered with it as now I know it’s not going to be a problem to take for the next three months and I’m really looking forward to the effects.

A couple of my friends have taken it as well. One of them suggested dividing the sachet in two and having one half with breakfast and one with lunch. The other suggested diluting it with more water, however I’ve actually found that a little less water works better for me, and then drinking lots of water afterwards.

The biggest effect I’ve noticed so far is the improvement in my nails and my energy levels. I’m surprised it’s showing up in my nails so quickly, as nails are something I would observe when looking at a person’s health as they are a very good indicator particularly of vitamin and mineral deficiencies, so I’m delighted with that. My energy levels have started to improve as well and I also find my focus is sharper.

All in all, a very successful two weeks!

This website uses cookies to improve your experience while you navigate through the website. Out of these, the cookies that are categorized as necessary are stored on your browser as they are essential for the working of basic functionalities of the website. We also use third-party cookies that help us analyze and understand how you use this website. These cookies will be stored in your browser only with your consent. You also have the option to opt-out of these cookies. But opting out of some of these cookies may affect your browsing experience.
Necessary Always Enabled

Any cookies that may not be particularly necessary for the website to function and is used specifically to collect user personal data via analytics, ads, other embedded contents are termed as non-necessary cookies. It is mandatory to procure user consent prior to running these cookies on your website.