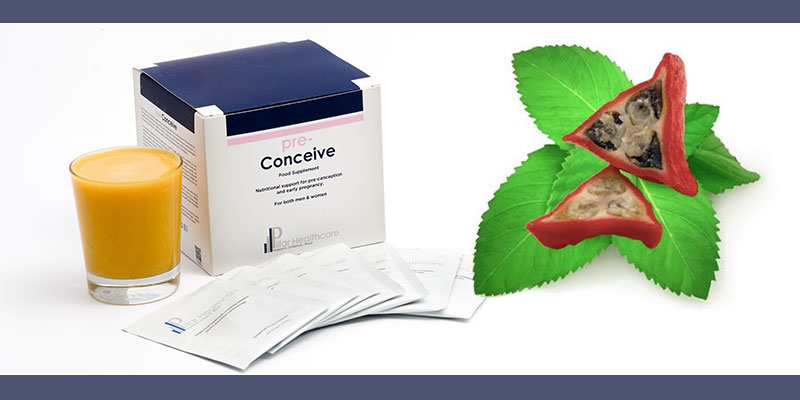 Pillar Healthcare is delighted to announce that we have just improved the taste of pre-Conceive, in response to feedback from many of our regular users.

The change comes after working for some time on possible variations to our formula, in order to maintain our ethos of using only 100% all-natural and nutritional ingredients. An issue with taste previously existed simply because many natural ingredients just don’t taste very nice, but we are now happy that we have improved the taste without compromising our all-natural philosophy.

The change means that pre-Conceive now contains Thaumatin. This is a natural sweetener which has been used in West Africa for hundreds of years, and which is approved by the European Food Safety Authority.

It is produced from the katemfe fruit (pictured above), which contains one to three seeds surrounded by a gel, and capped with a membranous sac, which contains the material used as a sweetener.

It is a protein with just four calories per gramme, and it has zero glycemic index. It is not harmful to teeth, and is very suitable for diabetics to use. Also, because it is an astonishing 2,000 times more sweet than ‘ordinary’ sugar, only very small amounts need to be used.

It leaves a slight liquorice after-taste when ingested in larger amounts, but because the amounts used in pre-Conceive are so small, this should not be detectable to anybody with anything but the most sensitive of taste buds!

If you still find the taste of pre-Conceive is not to your liking however, you can find some tips now to make taking it easier on our How to take pre-Conceive page.

This website uses cookies to improve your experience while you navigate through the website. Out of these, the cookies that are categorized as necessary are stored on your browser as they are essential for the working of basic functionalities of the website. We also use third-party cookies that help us analyze and understand how you use this website. These cookies will be stored in your browser only with your consent. You also have the option to opt-out of these cookies. But opting out of some of these cookies may affect your browsing experience.
Necessary Always Enabled

Any cookies that may not be particularly necessary for the website to function and is used specifically to collect user personal data via analytics, ads, other embedded contents are termed as non-necessary cookies. It is mandatory to procure user consent prior to running these cookies on your website.