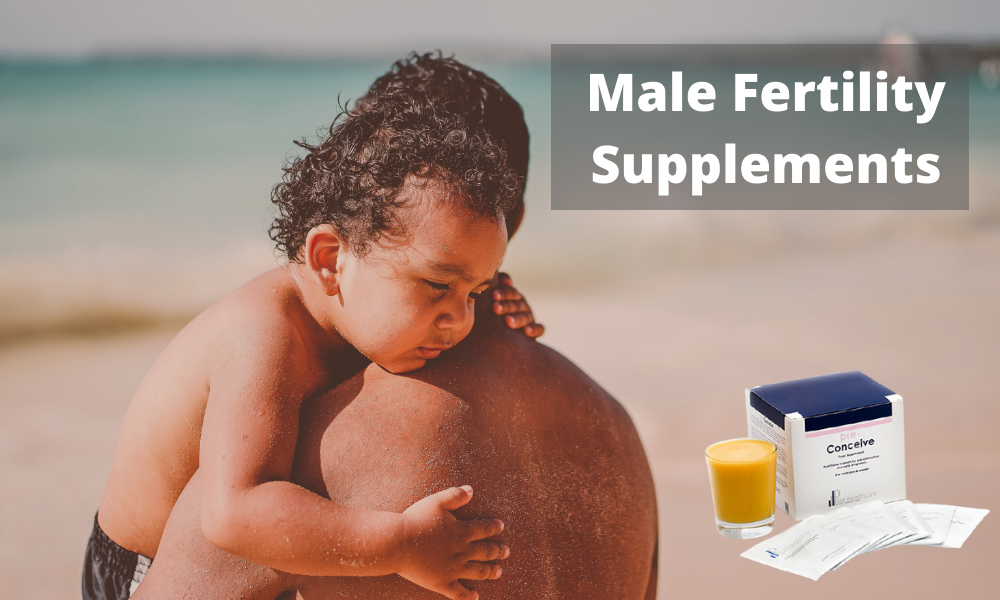 1 in 15 men have difficulty in producing sufficient levels of healthy sperm to allow their partner to conceive. Using the right Male Fertility Supplements can help address these issues in most cases.

How our Male Fertility Supplements can help

That’s where pre-Conceive can help. Its unique formula of 31 key nutrients is clinically proven to increase sperm count in 71% of men, and increase total sperm motility in 85% of men. Those results can massively boost the chances of your partner becoming pregnant.

There are four key steps in the journey from producing sperm to successful fertilisation of an egg:

pre-Conceive helps with all four stages.

Sperm manufacture occurs in several stages in the testes. Coiled structures called seminiferous tubules produce around twelve billion sperm cells per month. Sperm migrate from these tubules to the epididymis, where they are stored and develop into maturity.

Nutrients including Arginine, Selenium, and Zinc all occur naturally in sperm, and play vital roles in ensuring the health of the sperm.

Arginine helps increase both sperm count and sperm mobility. pre-Conceive contains 5,000mg of organic Arginine which is up to 500 times more than cheaper Male Fertility Supplements.

Selenium has been extensively studied for its positive impact on sperm health. Selenium is essential for the creation of sperm. It is involved in the tail, the head and mid-piece and the overall protection of the sperm and DNA. pre-Conceive contains 200µg of Selenium which is up to 4 times more than cheaper Male Fertility Supplements.

Zinc has been shown to boost sperm levels; improve the form, function and quality of male sperm, create the tail, outer membrane and protect DNA. pre-Conceive contains 30mg of organic Zinc which is up to 2 times more than cheaper Male Fertility Supplements.

pre-Conceive adds significantly to the levels of Arginine, Selenium, and Zinc, dramatically increasing the likelihood of healthier sperm being produced. With those fundamental building blocks in place, the other tasks become easier.

Before the sperm leaves the body, it can be exposed to toxins and potential ‘free radicals’ – molecules which occur naturally in the body, and which attack other molecules.

The body uses antioxidants to protect itself against damage from such attacks. However, the natural antioxidant capacity of semen decreases with age, and is lower again in men with poor sperm quality. pre-Conceive counteracts this by delivering some of the most researched and accredited antioxidants available, in their therapeutic doses, to provide massively increased protection for the sperm.

Ensuring the sperm gets to the egg

The healthier the sperm, the better it can swim, and the greater the chance of it reaching the egg.

It needs energy to do this, and the energy-enhancing nutrients in pre-Conceive can help deliver this. These include the B vitamin family, carnitine, and Co-Q-10, which all help with the conversion of sugars into energy.

pre-Conceive also provides the necessary nutrients for the sperm to survive after being ejaculated. This is facilitated by the alkaline environment of the seminal fluid. Agents like magnesium and calcium are found in the fluid, protecting the semen from the acidic environment of the womb.

pre-Conceive contains 400 mg of magnesium which is up to 62/3 times more than cheaper Male Fertility Supplements.

Fertilising the egg and transferring DNA

Again, the energy of the sperm plays a key role here, and the unique blend of nutrients in pre-Conceive continues to deliver the necessary energy for this vital process.

The combination of healthier sperm, increased protection, and added energy means that the sperm is now far more likely to achieve its ultimate goal – fertilising the egg – than it would have been without pre-Conceive. And with successful fertilisation, comes pregnancy – the outcome you desire. That’s the power of pre-Conceive.
The pre-Conceive formula was specifically designed to provide you with the perfect combination of Male Fertility Supplements. It contains 31 key nutrients – all shown by thousands of clinical trials to improve male fertility – in levels far above any found in other, cheaper, Male Fertility Supplements.

In fact, to achieve the same benefit as just one serving of pre-Conceive, you would typically have to consume:

Doing so would cost an estimated €500 per month – or approximately four times as much as the cost of pre-Conceive.

The pre-Conceive formula, that was developed over three years by a team that has combined experience of more than 60 years in the field of nutrition, is:

pre-Conceive is your effective, all-natural, and clinically-proven Male Fertility Supplements means of increasing both sperm count and sperm mobility.

What Those Figures Mean – For Men

Comparing the pre-Conceive formula figures to the levels of nutrients found in a popular, cheaper, fertility supplement for men shows that pre-Conceive delivers: 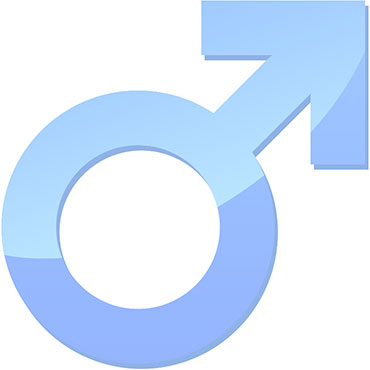 pre-Conceive also contains therapeutic doses of many key nutrients not found in that other supplement at all. These are: Citrulline, NAC, Q10, Alpha Lipoic Acid, MSM, Glutamine, Glycine, Calcium, Choline, Omega 3, and Iodine.

In total, pre-Conceive delivers a total of 19,465mg of active nutritional ingredients in every serving.

A second leading competitor has only 443mg. 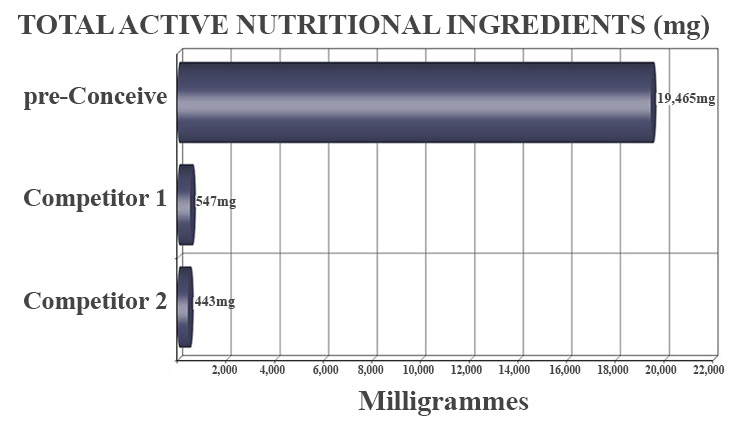 This is the power of pre-Conceive – delivering more of what your body needs, in the way it needs it delivered, to boost your chances of achieving pregnancy.