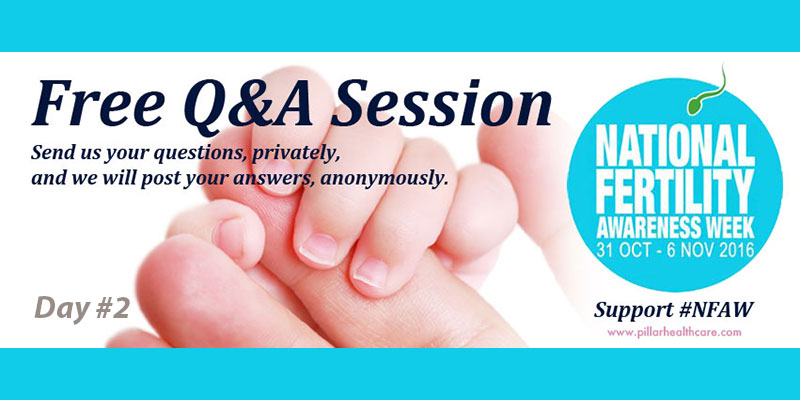 National Fertility Awareness Week 2016 runs from Monday October 31 to Sunday November 6, and to mark the event, Pillar Healthcare’s founder and Managing Director Mark Whitney is available to expertly answer any fertility-related questions you may have.

Questions can be sent privately via our contact form, by e-mail to info@pillarhealtcare.ie, or as a private message on our Facebook page or through our Twitter feed.

Answers will be posted here each day.

Today’s Questions and Answers are

What are the symptoms of Endometriosis?

Endometriosis is a long-term (chronic) condition. Symptoms can vary significantly from person to person, and some women have no symptoms at all. The most common symptoms include:

Most women with endometriosis get pain in the area between their hips and the tops of their legs. Some women experience this pain all the time. Other symptoms may include:

How do I know when I’m ovulating?

It is important to note that ovulation symptoms vary from woman to woman, with some women experiencing no symptoms at all. However, common signs that occur in most women include :

These 3 main signs of ovulation can be studied and tracked so that you can accurately predict when you ovulate. It should be noted that there are apps, websites, calendars and devices that can help you predict when you are ovulating.

There are other ovulation signs that women may experience in addition to the 3 main ovulation symptoms. These are called secondary signs and may not happen as consistently, if at all, for many women.

These ovulation symptoms may include:

Can being overweight impact male fertility?

Men who are obese generally have lower testosterone in their blood stream, negatively impacting on their fertility. Overweight and obese men have poorer sperm quality than men of healthy weight. Being overweight or obese can also cause hormonal changes that reduce fertility and make men less interested in sex. Men who are very overweight are also more likely to have problems getting an erection. Together, these factors reduce the chances of men who are overweight or obese fathering a child. Being underweight can also reduce a man’s sperm quality and therefore his fertility. A BMI under 18.5 is classified as ‘underweight’.

Can caffeine really impair my fertility?

Over the past couple of weeks, caffeine and fertility appears to be on everyone’s mind. It is an interesting topic with no hard and fast rule, as everyone is different. I myself am a huge tea drinker, which you know has levels of caffeine in it. I quite enjoy my cup and look forward to it – but the crucial thing to note here is, I don’t depend on it (I think).

I think we all know someone in the family or the workplace who just cannot function without their caffeine injection in the morning or in the afternoon. Like most things, small amounts of most substances are exceptionally well tolerated by the body. If we abuse it, then it will cause problems. A cup of coffee or even strong tea will have the same effect on your body as stress, or getting a fright, panicking and worrying. This will then interfere with your hormonal and menstrual cycle. It will also interrupt the sperm creation process in a man. This is why it is a good idea to de-stress when trying to conceive, easier said than done I know.

Some studies have reported that increased caffeine consumption (eg, >300 to 500 mg) is associated with a modest, but statistically significant decrease in fertility, while others have not found an adverse effect. The widespread consumption of caffeine at doses associated with subfertility makes it a potentially important contributor to fertility problems.

What is an antioxidant and how does it help?

Over the past ten or fifteen years, antioxidants have become such a buzz word. They have been touted as miracle cures for your heart, your brain, your skin and your fertility. They also appear to be in everything – your food, your cosmetics, your supplements – but what do they do and how do they work.

At a base level, antioxidants clear up and remove ‘free radicals,’ from the body. There is a strong theory in the scientific community, the free radical theory of ageing. This states that the cells in our body age because of the accumulation of free radical damage over time. The body craves antioxidants as they support the functioning of many of our systems, our cardiovascular and immune systems to name but two. They also circulate in the blood and look after your lungs, your brain, the blood itself and your reproductive organs. The ovaries and the testis are surrounded by antioxidants. We even find two of the most important and heavy hitters, Glutathione Peroxidase and Superoxide Dismutase, around the ovary and the egg and in seminal fluid. The antioxidants protect the egg on its journey down the fallopian tubes and also protects the sperm cell on its journey to meet the egg. Hundreds of clinical studies show how effective antioxidants can be; Zinc, Selenium, CoQ10, NAC and so on all have clinical evidence to show their antioxidant effects. Motility, count, DNA and hormonal patterns have all been improved with antioxidant supplementation.

I take anti-inflammatory medication, will it reduce my fertility?

The results of a study presented today at the European League Against Rheumatism Annual Congress (EULAR 2015) show that NSAID’s (Non-Steroidal Anti-Inflammatory Drugs like aspirin and ibuprofen) significantly inhibit ovulation in women with mild musculoskeletal pain. Of the women receiving NSAIDs, only 6.3 percent (diclofenac), 25 percent (naproxen) and 27.3 percent (etoricoxib) ovulated, compared with 100 percent of the control group.

These findings suggest that readily available non-steroidal anti-inflammatory drugs (NSAIDs) could have a harmful effect on fertility, and should be used with caution in women wishing to start a family.

‘After just ten days of treatment we saw a significant decrease in progesterone, a hormone essential for ovulation, across all treatment groups, as well as functional cysts in one third of patients,’ said study investigator Professor Sami Salman, Department of Rheumatology, University of Baghdad, Iraq. ‘These findings show that even short-term use of these popular, over-the-counter drugs could have a significant impact on a women’s ability to have children.’